Question: Three identical balls are thrown from the

Three identical balls are thrown from the top of a building, all with the same initial speed. The first ball is thrown horizontally, the second at some angle above the horizontal, and the third at some angle below the horizontal, as in Figure 5.16. Neglecting air resistance, rank the speeds of the balls as they reach the ground, from fastest to slowest. (a) 1, 2, 3 (b) 2, 1, 3 (c) 3, 1, 2 (d) All three balls strike the ground at the same speed. Figure 5.16: 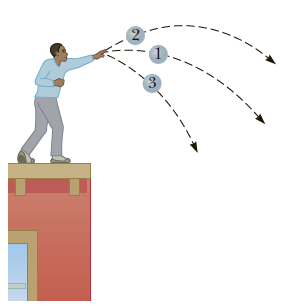 (a) Can the kinetic energy of a system be negative

Bob, of mass m, drops from a tree limb at