Question: A bowling ball is suspended from the

A bowling ball is suspended from the ceiling of a lecture hall by a strong cord. The ball is drawn away from its equilibrium position and released from rest at the tip of the demonstratorâ€™s nose, as shown in Figure CQ5.6. (a) If the demonstrator remains stationary, explain why the ball does not strike her on its return swing. (b) Would this demonstrator be safe if the ball were given a push from its starting position at her nose? Figure CQ 5.6: 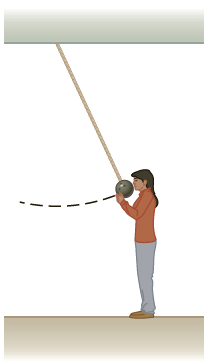 The force shown in the force vs. time diagram in Figure

A force of magnitude Fx acting in the x - direction on